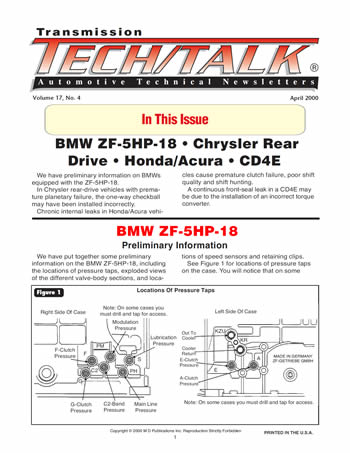 We have preliminary information on BMWs equipped with the ZF-5HP-18.

In Chrysler rear-drive vehicles with premature planetary failure, the one-way checkball may have been installed incorrectly.

A continuous front-seal leak in a CD4E may be due to the installation of an incorrect torque converter.

We have put together some preliminary information on the BMW ZF-5HP-18, including the locations of pressure taps, exploded views of the different valve-body sections, and locations of speed sensors and retaining clips.

See Figure 1 for locations of pressure taps on the case. You will notice that on some cases you must drill and tap for access in order to measure a particular pressure.

See Figure 2 for an exploded view of the upper front valve body with valves identified.

See Figure 3 for speed-sensor locations on the channel plate.

See Figure 4 for an exploded view of the solenoid valve body with valves identified. Notice that an O-ring goes in the groove on the adjustment screw.

See Figure 5 for an exploded view of the lower rear valve body with the valves identified.

See Figure 6 for an exploded view of the lower front valve body with the valves identified.

See Figures 7 through 10 for the locations of the retaining clips in the various valve bodies.

See Figure 11 for the locations of orifices, checkballs, screens, checkvalves and springs in the channel plate.

Before or after overhaul, some 1994 and later Chrysler or Jeep vehicles equipped with rear-wheel-drive or four-wheel-drive transmissions may exhibit premature planetary failure.

Locate the return hose, which is near the radiator as shown in Figure 13. The threaded fitting will have an arrow and the word flow identifying the one-way ball and spring. Remove and discard the hose shown in Figure 12 and reconnect the existing lines with a suitable hose. After making the repair, ensure that there is a minimum of 1 quart of fluid flow in 20 seconds when the rear cooler line is placed into a container and the transmission selector is in Neutral.

These complaints can be caused by internal leaks resulting from damaged O-ring seals, worn feed-tube bushings, undersized clutch-piston seals, leaking reed valves and cracks in drums that can be extremely difficult to locate because of the design of Honda/Acura transmissions.

The main difficulty is in pressure-checking the clutch circuits while being able to see whether there is any unacceptable leakage.

Pressure-test fixtures designed to pressurize clutch circuits before the transmission is completely assembled and installed in the vehicle are now available from Answermatic Division of Zoom Technology.

The test fixtures in Figures 14 and 15 illustrate how the 3rd- and 4th-clutch circuits can be pressure-checked.

Figure 16 illustrates pressure-testing of the 2nd clutch with the 2nd-clutch test collar. The test collar is available for the CA, L4, P1, G4, L5 and F4 transmissions.

These test fixtures can be used with Answermatic VB2000 or AMI test machines to check oil retention of these clutch circuits or for wet air tests with regulated air and oil for leakage.

Some vehicles equipped with the CD4E transaxle may exhibit a front-seal leak after overhaul.

One cause may be installation of an incorrect converter.