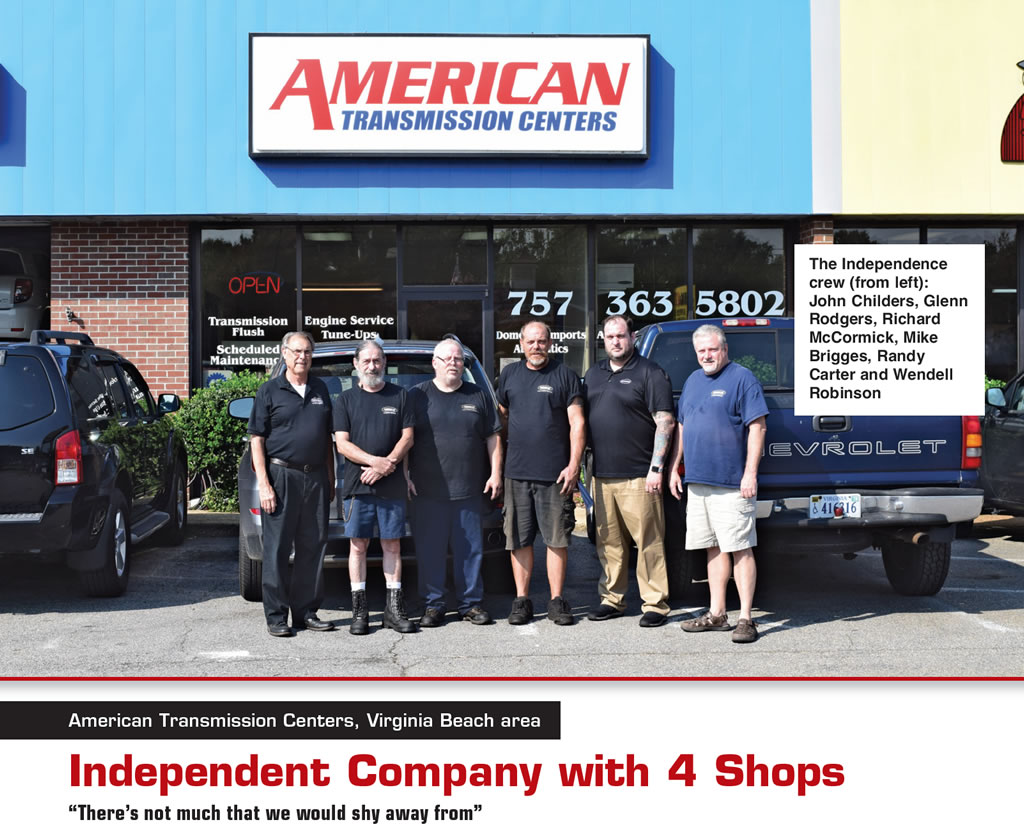 American Transmission Centers, a company with four transmission shops, capitalizes on the big metro area of Virginia Beach, Norfolk, Chesapeake and other cities where more than 1.5 million people live.

American Transmission Centers, a company with four transmission shops, capitalizes on the big metro area of Virginia Beach, Norfolk, Chesapeake and other cities where more than 1.5 million people live.

Will Robinson owns outright two of the shops, the Virginia Beach and Chesapeake locations, and he has entered into partnerships with Steve Ashley and Rick Baker. Steve is at the helm at the Lynnhaven site; Rick at Norfolk. Both are co-owners.

The shops are spaced roughly 10 miles apart, providing convenience for their customer base. The shops are much the same in services, with a few exceptions for technicians’ specialties.

In early years, Will was involved in franchises in Atlanta, then he moved to coastal Virginia where he moved into independent shops.

All shops are equipped with everything needed to rebuild transmissions. Two stores have five lifts, the others have four. The facilities are similar in size, 32,000-3500 sq. ft. The breakdown of activity is 85% transmission, 10% engine and 5% other such as air conditioning service for an extra item during the summer.

The shops work on all kinds of imports and domestics and any kinds of transmissions.

“There’s not much that we would shy away from,” Will said.

The shops work on vans such as E-250s and E-350s. Because of the size of the shops, they avoid big vehicles such as motor homes or large trucks.

“They are in the streets every day, five days a week. We have great relationships with other shops that do not do transmission work,” Will said. “We take care of that for them, in some cases to where we’d do a bench job for some shops. Other shops don’t want anything to do with it, and they refer their customers to us.”

Will said the outside sales may be wholesale, but they also may be retail referrals. “Much of the outside sales is retail. About 10% is wholesale. We do some fleets, but smaller fleets – 20-25 vehicles, and we just do their transmission work.”

“Occasionally we see a performance transmission, or guys who want to beef up their transmissions because they’ve added horsepower due to their cars. It’s a very small segment,” he said.

“We do R&R work for customers, for instance, bringing a transmission they may have bought, let’s say a high-performance unit or something of that nature. We’ve installed a unit, and of course we flag that as ‘no warranty!’” Will said they don’t look for this kind of work.

Most of the business involves rebuilding. “Everything that comes out of the vehicle we rebuild in house, if possible. If a unit is too far gone, will replace with another unit.”

“We have customers who come in thinking they have a transmission problem when it’s actually the engine,” Will said. Depending on the diagnosis, technicians are ready to perform some kinds of engine and general repair.

“In this day and time, with the vehicles that we’re working on, it could be anything from electronics to ABS brake problems causing issues that seem to be a transmission failure.

“We see a lot of work come into our shops that is non-transmission. A lot of it we send to other shops that do business with us. We don’t want to get into the ABS work and things of that nature. It’s not our cup of tea. A lot of the electrical issues, computer problems and things like that we refer to other electrical shops where they specialize and have the right diagnostic tools.”

However, simple problems are worth addressing as gestures of goodwill, such as check engine light, loose gas cap or 02 sensor. Motorists can drive in and get a scan usually on the spot.

As for customer service, they try to be outstanding – keeping regular customers and seeking new ones, he said. In addition, acquire the best quality parts for rebuilding and minimizing comebacks due to parts failures.

Three decades ago, Will was working with a partner with franchise transmission shops in Atlanta. They found that the fees charged by the franchisor to the franchisee caused two types of difficulty: they could not perform services for some customers, or they could set prices that would cut too much into the profit.

In response, they began to work on an alterative for those situations, using the American Transmission name.

“We developed that name for the sake of sending some of our customers who couldn’t afford to get service through the franchise shop to an independent shop,” Will said. “So rather losing the business we developed something that we could maintain the business.”

Later, Will sold off his franchise shops and, under a non-compete agreement, moved to coastal Virginia and redeveloped the American Transmission name. He has been operating in the area since 1998.

Will’s goals include developing co-owners in the two shops he owns. In a few years, he’ll be looking to retire.

“The people who’ve been with me and interested in being an entrepreneur, then I want to work with them, putting them in a shop, helping them along the way, and hopefully the business will continue to grow and flourish with younger people,” he said.

Any consideration of expanding the company is up to the co-owners. Will said he’s not interested in starting another shop, but he’d coach them in the venture.

“Seeing the company go on without me is very important,” he said. “A lot of these guys have been with me for a lot of years. We want to see them continue to prosper and carry on our good name.”

One of the recent innovations in the field is the continuous variable transmission. Some shops avoid the CVT. Will has a different view.

“We believe it’s unavoidable. The CVT market is growing rapidly, and I don’t think they’re going away. I don’t think it’s a flash in a pan. We work on keeping our guys educated on the CVT transmissions.

“A lot of the guys came to it naturally. They’ve dealt with the CVTs in snowmobiles from years and years ago. So they’ve been around for quite a while.

“And they’re really not that complicated when it comes to it. There’s a lot more complicated transmissions on the market now than the average CVT.
“We’re not afraid of them, in other words.”