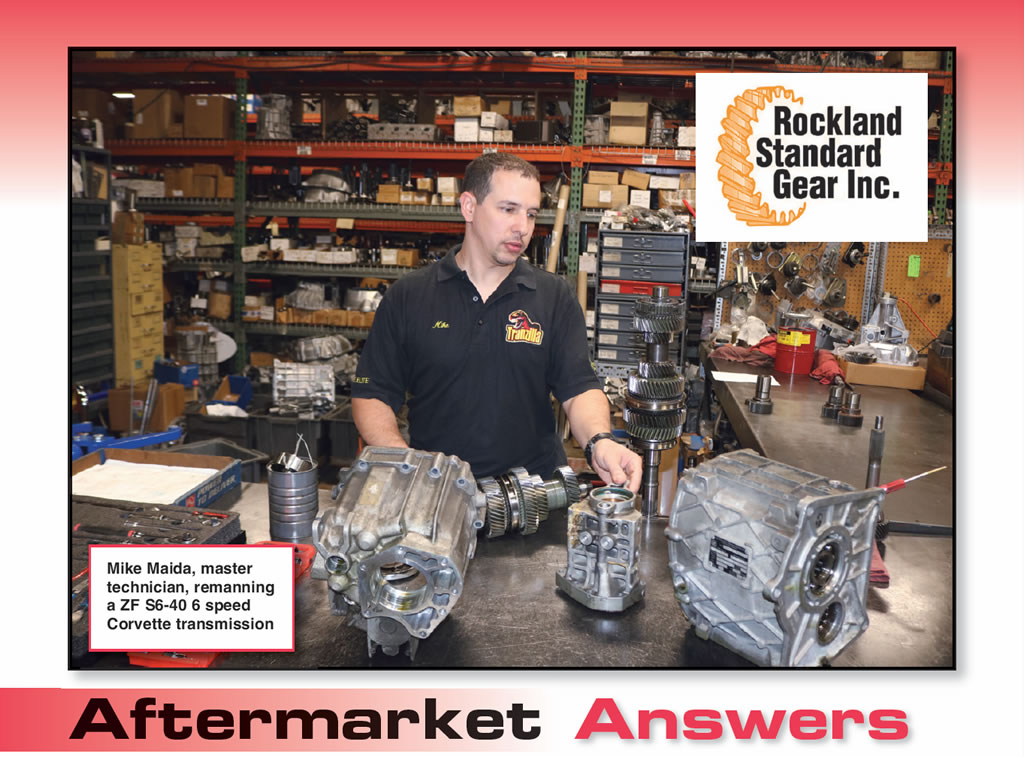 Time has passed quickly for Rockland Standard Gear partners Brian Johnston and Mike Weinberg. Forty years ago, Weinberg was offered the opportunity to purchase a transmission shop. He found a couple of partners in Johnston and his late brother Eugene opening All Transmission in Rockland County, New York

Time has passed quickly for Rockland Standard Gear partners Brian Johnston and Mike Weinberg. Forty years ago, Weinberg was offered the opportunity to purchase a transmission shop. He found a couple of partners in Johnston and his late brother Eugene opening All Transmission in Rockland County, New York.

Weinberg says, “Rockland started because we did a lot of stick units in that shop and we had trouble getting parts. I could order from the dealership but because some of the parts were D-movers they’d have to be ordered and the whole time we’ve got a customer’s car waiting. So we started this company and, for a while, we were the only 800 number out there. The mid-’80s were very good for us.

“It was 1981 and there were a lot of stick transmissions around: three-speeds, four-speeds, a few five-speeds. We literally started Rockland in about 400 square feet of our transmission shop. A year later we’d grown to the point of needing a separate warehouse facility to service the growing parts business.”

“At that time, 90% of our business was made up of sales to transmission shops, car dealers or repair facilities. We sold new units but most of our business was parts for units like the T5. It was mostly domestic at first; later we took on Toyota and Mitsubishi.

“We had a couple of things that we made that were outside our core business. We made the 350 Case Saver for instance. Those units were the bread and butter of the industry. They would wear where the spring cushioned the shock of the sprag working in the case. Eventually that would cause a gouge in the case. We made a solid piece to fit in there in place of the spring so that the cases could be saved.

“But that aside, I would say that 98% of what we did was stock replacement. Those were glory days for us. The BorgWarner-designed T5 manufactured by Tremec (GM Camaro, S-10, Trans Am, Jeeps, Mustangs) was close to 50% of our sales. It was incredible; there’s never been a run like that of standard transmissions and there never will be again. The Mustangs had a torque rating as high as 315. Guys blew those up on a regular basis so we were able to make a lot of money from those parts.”

In 1998 the company moved to its current 66,000 sq.-ft. location, in Sloatsburg, N.Y., where the building houses sales and support offices, the warehouse operation and a rebuilding area that exclusively concentrates on rear differentials, manual units and transfer cases.

“Most of our experience in enhancing stock units came as we started remanufacturing ourselves. We took the components that we would use in-house and made them available to other rebuilders.

“We remanufacture straight stock replacements for rear ends, transfer cases and transmissions. Then we have race-ready units as an upgrade. For instance, one of the popular units from Tremec contained brass synchro rings that shifted fine at 3,500 rpm. The guys building up hot rods would be shifting over 5,000 and it was like hitting a rock wall. So we made carbon-fiber-lined rings for our units. Those rings are still good business for us today. When you’re remanufacturing, you can’t just put parts in; you’ve got to correct design defects or defects that arise when the unit is used differently than a stock unit.

“We will make changes and upgrades in nearly every unit we rebuild. For instance, the 44-05 transfer case was very popular, a spectacular big run. All the Explorers had them. They had a ramp system called a shift cam. When you went to shift into four-wheel drive the fork rode on a bearing along the ramp. It had too much play in the original design so it could move out. We redesigned both the fork and the ramp to eliminate those problems. It was direct fit so we incorporated that into all of our rebuilds and added it to our product line of parts as well. They called that a shift cam.

“Along the way everything becomes not only innovative but defensive as well. We’re putting out units with a warranty. We don’t consider mileage, only the length of time. I mean unless we send somebody over to inspect each installation, we’ll never know the true mileage story anyway. So, you want to build the product as bulletproof as you can. Then you don’t have the comebacks.

“Across our entire product line, we run one-and-a-half to two-percent on comebacks. That’s a bit deceptive because we count anything that generates a support phone call to us as a comeback.

“Today, we’re doing a good business with the Dodge Hellcat. That’s a 750-horsepower vehicle, and we’re building a ton of units for Hellcats right now because we produce units with ratio changes that made that car perfect, that are only available through us.”

Weinberg’s partner, Brian Johnston, goes on to explain that much of the Rockland focus for the past decade has come reluctantly as the need to engineer and manufacture aftermarket parts to address a flawed system of parts availability.

“What happened as of 2007,” says Vice President of Engineering George Kreppein, “is that somebody signed the deal with the devil that restricts the aftermarket from having access to parts from the manufacturers who provide them to the OEMs.”

Weinberg continues, saying, “The OEM used to keep its dealers in business because 50% of what they did in the service departments was warranty work. The longevity of these units has improved to the point that there isn’t much warranty work left. So, in order to maintain profit centers for those dealers, the OEMs say, ‘We will pay for the tooling that contract manufacturers use and anything made on our tooling that isn’t used to manufacture new units can only be sold by our dealers.’

“While the cost of tooling and designing the aftermarket part is very high, the result is a part that can be less expensive than the captive market dealership part and, at the same time, can address any design or longevity issues that show up in the original part design. And there’re availability issues as well. These aren’t fast moving parts that dealerships want to stock locally. So the shop guy with a job on the bench is looking at three or four days while the dealer gets the part through the OEM channel or overnight from us.

“We are an Elite Tremec Distributor, one of the largest six-speed parts distributors in the world. They cannot sell me parts for the seven-speed Corvette because those parts are OEM captive. Many of the parts that I can purchase for six-speed units are used in the seven-speed. And for those that are different, I don’t want to do it, but I have to make those. What choice do I have? The unit breaks and unless I can get parts, I can’t fix it.

“The first problem the owner of a vehicle finds is that he can’t get his vehicle repaired quickly and at a reasonable price. Under warranty this isn’t much of a consideration other than the time involved. And here’s the real irony: It’s the vehicle brand that gets the bad name. It’s understandable that the automakers wish to keep the profit centers for their dealer networks.

“This is a festering problem that’s been going on for 10 years and continues to get worse. One step further and the OEs don’t want to support that many inventory numbers and a shop learns that the part needed to finish the job is not available, and that they have to buy a complete unit. Not too long ago there was an incident with the BMW Mini Cooper. So we had this deal at the shop where you couldn’t but the parts we needed in the United States unless you ordered a complete unit through one of the dealerships for something like $4,500 to $5,000. That’s obscene. In Europe, where there’s plenty of aftermarket access to the components, that same order of parts costs between $600 and $700. This is anti-competitive and it costs the customer. It’s the vehicle owner, the end user who’s really getting pounded.

Weinberg and Johnston agree that a deep understanding of the marketplace coupled with innovation is the way to future successes. Whether it’s improving a stock unit to stand up to the rigors of high torque loading or developing parts that the captive market has either made too expensive or unavailable maintains Rockland Standard Gear’s leadership position in the manual transmission niche aftermarket.

Mike Weinberg says that most of the improved parts Rockland develops are innovative offshoots from the units they rebuild in house. When we make an improved part for our units, we add that part to our catalog so that it will be available to guy rebuilding their own units. Right now, Vice President of Engineering George Kreppein has been working up a series of transfer-case parts that improve longevity of GM Magnapower units from 2007 forward.

Kreppein points out in this photo a number of recently developed and upgraded aftermarket replacement parts. On the left, both 148 mm and 142 mm transfer case input shafts and range sleeves. The large shaft on the left updates the 3023 transfer case while the one on the right he says updates the 3024. Both of these shafts, he stressed, contain the heavy-duty snap ring.

He continued to explain saying the top row shows updated parts including a 1226 mode fork and range fork on the left; range and mode forks for the 1626 and 3023/24 units pictured on the right. Between the two shafts he points out the 3023/24 mode cam and motor sprocket as well as a mode sleeve used on the 1226/1626 units. On the far right in the photo he says that Rockland now has updated the drive sprocket found in 1226 and 1626 units with the HV074 chain. At bottom are a pair of clutch-control levers for 3023/24 transfer cases.

Weinberg, who is well known in the transmission aftermarket for his racing experience as a driver, says he thinks there is an exciting role to be played by dual-clutch units in drag racing.

“We still manufacture a few sticks for drag racers but that market is pretty much automatics these days, says Weinberg. “What’s going to be interesting in this area is the use of the dual-clutch units. The dual clutch shifts in eight milliseconds. The Bugatti Veyron at 1,200 horsepower handles 1,100 foot-pounds of torque and employs a DCT. With DCTs you have instantaneous shifts without any overlaps, and you don’t have the torque converter meaning you don’t have the heat that goes with the converter. Dual clutch I like because you can pre-select gears. So, why wouldn’t these guys be looking at that to take to the track?