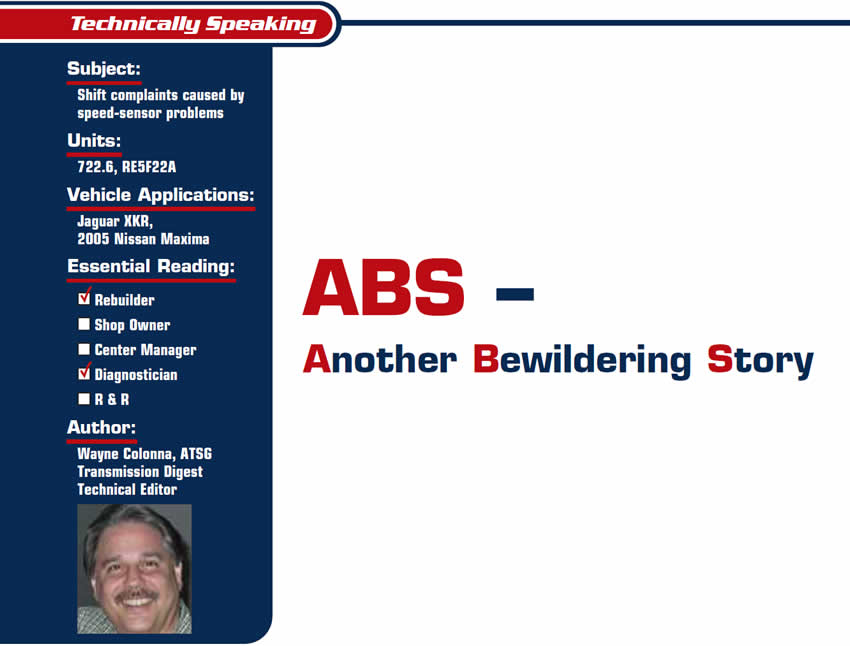 Well, I have two bewildering stories to share with you that normally would give you nightmares. However, by reading this story you will see that it really was another man’s nightmare. But for you it will be a sweet dream, since you will acquire his experience and bypass the pain he suffered.

Many of you who have raised children may have sat in their bedroom in the early evening and read them a positive bedtime story to help them fall asleep. After they fell asleep you would tuck them in, give them a little kiss on the forehead and quietly leave the room, and you hoped the positive story you read would give them sweet dreams while they slept.

Well, I have two bewildering stories to share with you that normally would give you nightmares. However, by reading this story you will see that it really was another man’s nightmare. But for you it will be a sweet dream, since you will acquire his experience and bypass the pain he suffered.

The first has to do with a 722.6 transmission in a Jaguar XKR vehicle. The shop that went through this painful experience is in England, 59 miles northeast of London in a town called West Mersea. The vehicle came in with damage to the sprags and the K3 clutch. After repairs the car was delivered to the customer. A few days later he called complaining that it would lose all forward gears at lower speeds (during coast) and would re-engage after it came to a complete stop.

The shop found no codes in the system and nothing amiss inside the transmission. So a completely different transmission was installed, and after a successful road test the car was returned to its owner. A few days later the customer called again with the same complaint.

These 722.6 transmissions are known to have issues with sprags and sealing rings (especially for the K3 clutch) and excessive rear gearbox end play (called “float” in the UK), which causes similar complaints. But all these possibilities had already been eliminated.

This time the shop did an extensive road test with a scan tool in the live-data mode, watching the PID for modulating-pressure control. When they drove hard the problem never occurred. It would occur only during light-throttle coast, and sometimes you would have to drive as much as 200 miles (322 kilometers) before the problem occurred.

When they finally experienced the problem themselves, they noticed that the modulating parameter dropped to 60 psi. You would think that 60 psi would not have caused the transmission to fall out of gear, but there are no physical pressure taps to see with a gauge what actual transmission fluid pressure was. Factory information tells us that line pressure has a range of 60 to 320 psi, and modulating pressure has a range of 0 to 125 psi. Whatever was occurring, the PID indicated a drop in pressure at the same time the vehicle went to neutral.

With no codes in the system, they decided to approach this problem electrically by checking grounds and ultimately changing computers as well as rewiring work, but to no avail. To bring this nightmare of a story – which lasted 200 hours and more than 6,000 UK pounds ($8,629.78 in U.S. dollars) – to a close, what they discovered is an example of the need to have the right tools and, of course, knowing what to look for.

They learned from a gentleman in Ireland that he had encountered the exact same problem and had discovered that it was due to a fault in the rear stub-axle nuts, which were just loose enough to cause loss of the pre-load that holds the ABS speed-sensor ring to the shaft. This allowed the sensor ring to intermittently stop moving, and the reaction caused the computer to place the transmission into neutral and not produce a code. Tightening the nuts resolved the problem.

We have seen differences in tire diameters of as little as 1/8th inch causing a variety of shift-related complaints, but to neutralize a transmission during light-throttle coast was a surprise to me. Having software to view ABS data is an absolute must in today’s transmission diagnostics and repairs. The capability to view live wheel-speed data could detect a problem like this or to see whether the computer initiated the curve-recognition strategy while the vehicle was going straight. ABS and traction-control data are making serious headway into the computer shift strategy of the transmission, especially when it has been designed to be the main source for a vehicle-speed signal. But it, too, can be a problem if it was designed to be a redundancy signal should the transmission vehicle speed sensor fail.

The next scenario has to do with an RE5F22A transmission in a 2005 Nissan Maxima that an AAMCO shop in Las Vegas had to deal with. The RE5F22A is the AW55-50SN transmission that also is used in Volvos, Saabs and GM vehicles. Many of us are aware of the myriad of problems the valve body and its solenoids produce. Delayed engagements into drive and/or reverse, harsh reverse, TCC slip or premature engagements causing the engine to stall, low line pressure, 2-3 flares and harsh 3-2 downshifts are just some of the problems encountered. And then there is the need to reset shift adapts, which is another dilemma, but that is not the focus of this article.

This particular vehicle was experiencing a variety of complaints similar to those just mentioned, but installing a different valve body with solenoids caused many of the complaints to disappear. Shift adapts also were reset, but the vehicle still had bumpy downshifts during slight tip-in of the throttle. The manager who road-tested the vehicle reported this problem to Bob, who does the majority of the diagnostics there. When Bob took it for a road test he discovered that this hard downshift occurred between 15 and 20 mph only during right-hand turns.

Much to his credit, when he came back from the road test and was looking at the car he noticed that it had low-profile tires. He decided to check their pressures and found reading of 15, 40, 45 and 50 psi. Bob inflated all four tires to the specified pressure, and when he road-tested the vehicle again, the hard-downshift problem no longer occurred. Just another example of how crucial tire size is as it relates to ABS and traction control, which are having a strong influence in transmission shift strategy.

The one thing that puzzled me, and still does, is why the tire-pressure-monitoring system didn’t report low tire pressure by illuminating the TPMS light on the dash. But then again, I have seen many items fail with no codes reported. So it happens. But should you see a lit TPMS light and you are experiencing shift busyness, wrong-gear starts, late upshifts, no high gear, harsh downshifts or neutralizing on downshifts, do not waste time on trying to fix that transmission with a valve body or solenoids or a transmission range sensor. Check the tire pressures and sizes first, and if you have ABS software look into your wheel speeds. It will get you rolling sooner rather than later and you will not be telling another bewildering story!