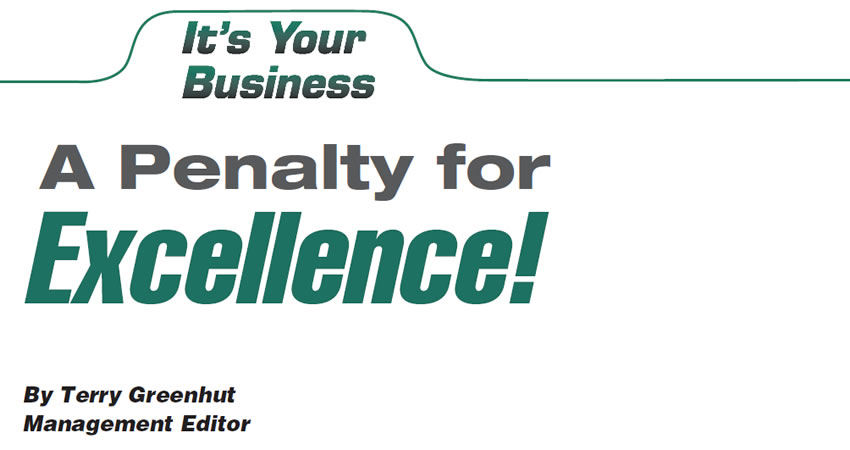 The outcome of this trial could influence how states that have regulations on auto-repair practices might dictate by what means work is priced in the future.

There is a lawsuit in progress that could, eventually, have an effect on the way car dealerships, automotive-repair and transmission shops do business. It involves a customer who believed he was overcharged by a shop that used one of the industry-recognized estimating guides to price a front-axle replacement on a Toyota. Apparently the book called for more than an hour to complete the repair and the technician finished it in 40 minutes. The customer was charged the book time. How did the customer know how long it took? He was watching the repair take place.

The outcome of this trial could influence how states that have regulations on auto-repair practices might dictate by what means work is priced in the future.

The incident raises many questions.

Since almost the beginning of the auto-repair aftermarket, work has been priced on the basis of the time it takes multiplied by an hourly labor rate that is determined by the amount the shop needs to break even and, it is hoped, be profitable. Since the customer always wants to know how much the job will cost before giving his or her approval to begin, “time and parts guides” were developed so shop owners and managers could give their customers accurate estimates or exact prices as soon as they knew the true extent of the repairs to be made. Could you imagine telling customers, “Let’s wait ’til I finish the job. I’ll see how long it takes and then figure out what to charge you.” Do you really think customers or state agencies would be OK with that? Customers would be screaming, “Can’t you just look up the prices in a book or something?”

Are the industry-standard guides accurate? I always thought they were. But they are an average of the time it should take to complete any particular task. Some jobs take more time than the book calls for and some less. Sometimes we work on 10-year-old rust buckets where the tool of choice is an oxy-acetylene torch and everything takes twice as long. Although customers don’t want to be charged for time they may not see a technician put into a job by finishing it early, they also don’t want to pay extra when a job takes much longer than the guide states. A job that is performed easily on a particular vehicle one day can be a nightmare on another one just like it the next day. The estimating guides, I believe, figure on the average expertise of the technician and the average-equipped facility. They take into account that a technician is probably not set up to do the same job on the same type of vehicle over and over again, so every job involves time for gathering tools, parts and information.

How are technicians to be paid? Car dealerships and many franchised and independent repair facilities, for decades, have based technicians’ pay on the flat-rate-hour concept. It rewards the expert who can complete a task more quickly, as long as it is done correctly. It also penalizes the trainee or a slower technician who takes longer than book time to complete a task, because he won’t get paid any more than the guide allows. The customer, meanwhile, is billed on the basis of the book time.

I’ve personally witnessed, in my own and other shops, jobs that wind up taking several hours more than book time, and customers are never charged extra because the shop owner made a commitment at the time of the sale to do the job at the price agreed upon. It’s been my experience that if the technician beats the book time it isn’t by a whole lot, but when he has problems he can invest several additional hours making it go right.

What if we couldn’t charge book time? If we couldn’t use the estimating guides and were allowed to charge only actual time, the least-experienced, most-poorly equipped shops would make the most money. They would take more time doing the work without the proper training, equipment and information systems and would, in many instances, keep hanging parts on the car until something would fix it, all at the expense of the motoring public.

I wonder how the Toyota customer with the stopwatch would have felt if he had had to pay for two or three hours of labor to have his axle replaced because the shop put an inexperienced technician on the job and charged actual time. I’m sure he wouldn’t have liked that, either. He probably would have been screaming that the “book” didn’t call for that much time.

Going from the ridiculous to the sublime, maybe we should offer customers the choice: “Either you can have our experienced technician with his $30,000 worth of tools, using all the right equipment and the flat-rate manual to price out the repair, in which case he might beat the clock and get you on the road quicker, or you can have Joe Trainee with his hundred dollars worth of tools, hardly any equipment and who scratches his head a lot, but whatever time it takes, that’s what you’ll be charged.”

Is the customer’s time worth anything? If I were the customer and thought that I could get the job done quicker and better, I surely would want to take advantage of that, even if it cost a bit more, but that’s just me. I’m sure there are customers who don’t see it that way.

It’s interesting, though, that we are in one of the few professions that has to justify its charges for services. Doctors don’t, but then again they don’t charge by clock time. Doctors call everything “a procedure” and sell it for “X” amount of dollars. Maybe we should, too. We could just pull a number out of thin air the way the so-called “professionals” of the world do. Eye surgeons get around $3,000 to perform a 10-minute laser procedure to correct nearsightedness. Is there any state agency that questions their price? Do patients take doctors to court claiming they were overcharged? No, because they agreed to the price of the procedure up front. Do doctors or lawyers have to post an hourly rate on the wall as we do in so many states? No, but for us it’s like inviting customers to time us.

We could sell procedures, too, for arbitrary amounts of money. “This is the procedure we are going to perform on your transmission. It costs “X” dollars. Will you be taking care of that with cash or using your credit card?” The only problem is that if the customer ever made a complaint to the Department of Motor Vehicles or consumer-affairs agency, the first thing we’d be asked to do is justify the price we charged by the time it took to do the job. We would then pull out the “Time and Parts Guide” in an effort to prove that it was OK to charge what we did. The inspector no doubt would take whatever that book said as being the gospel, so even though some kind of a flat procedural price was charged, the time in the book is still the primary criterion the inspector would use to determine whether the shop did right by the customer.

So around and around it goes. Will customers ever be happy with the prices we charge? I don’t think so, because they didn’t want to pay the first dollar to have a car repaired. It just isn’t anything they want to buy. Laser eye surgery is. So, whether we charge by the hour or a flat rate, whether we look up prices in a book or watch the minutes go by on the clock, they will never be happy.

I think our industry does everything possible to keep the cost to the consumer as low as possible while it works really hard to make a living. Invoking more rules upon us because a few customers can’t, or refuse to, understand our pricing methods can lead only to higher labor rates that will cost consumers in the long run.

I, for one, hope the shop prevails in this case, but that won’t keep some $228-an-hour lawyer from trying to make a case of it at a different level. By the way, let me know when you’re able to charge $228 an hour for your services.

Advertisement
In this article:Its Your Business, legal issues

A Penalty for Excellence!