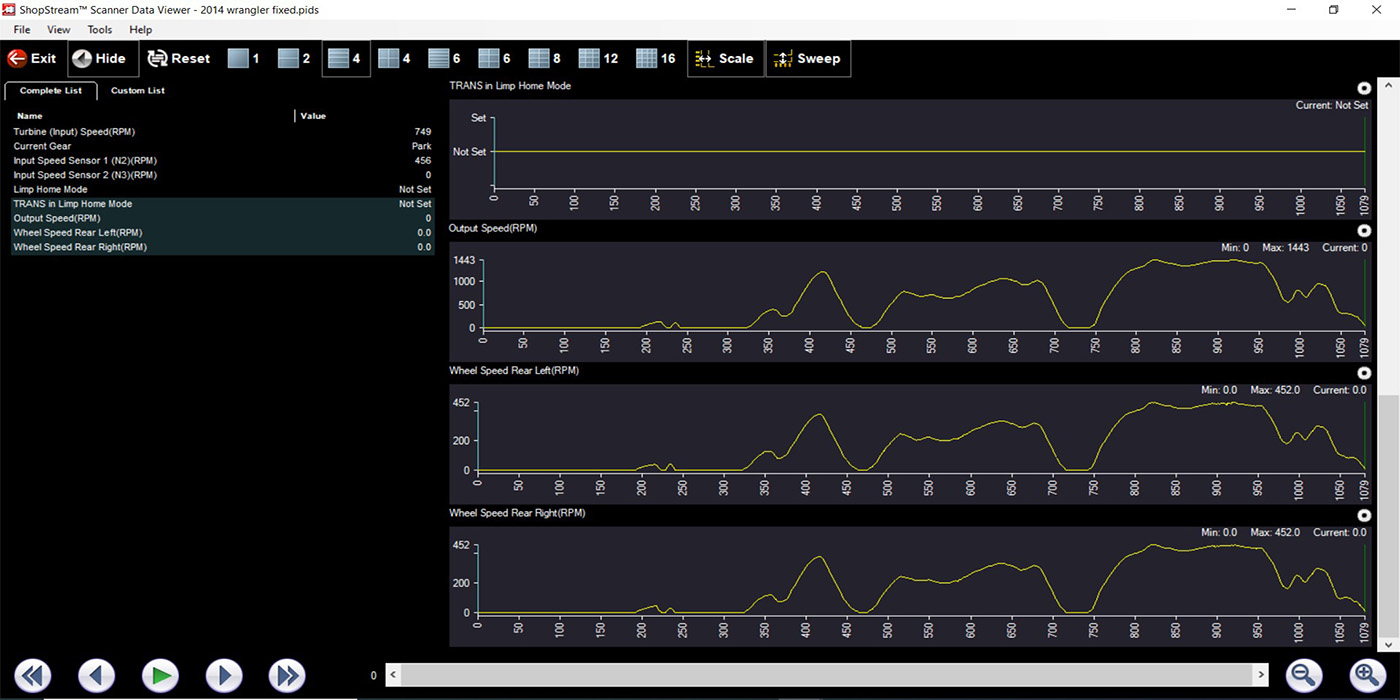 In late 2019 we had a customer bring us a 2014 Jeep Wrangler 4WD, equipped with the 3.6L engine and the NAG1 transmission (722.6). The customer’s concern was that it would not shift. Like every vehicle that comes to us, I started off an evaluation which is a predetermined set of initial procedures that are performed on each vehicle we look at.

I brought the Jeep into the shop to do the visual inspection and to check fluids which all looked good. I then proceeded to check the battery, starting, and charging systems which we refer to as an ESA (Electrical System Analysis). The Midtronics ESP-1000 came back with no issues found. I then performed a road test to attempt to duplicate the problem. I connected the scan tool which is a Snap-On Zeus model to do a complete scan of all on-board modules, and I was able to retrieve several DTC’s as follows: P0430 (catalyst efficiency bank 2), and P0016 (camshaft/crankshaft timing misalignment). Both of these codes were stored in the ECM.

I knew that a vehicle speed sensor code could cause a no shift condition, and I have also seen an engine-related DTC such as the cam/crank code cause similar concerns, but then I was thinking that this transmission only has the two speed sensors inside the transmission, on the conductor plate! I decided to clear the codes from all the modules. I then set up the scan tool with all of the appropriate data PIDS I felt were necessary to aid in diagnosing this Jeep and went for a drive to see how everything works.

The vehicle was cold when I started, and at first it worked fine and shifted great for the first eight or so miles. As I continued to drive I came up to a railroad crossing, and it was after I went over it (a very bumpy crossing), the transmission suddenly went into fail-safe mode. I pulled over to the side of the road so I could review my data from the scan tool. The only PID from my data list I selected that showed anything wrong was one labeled “output RPM”; it had gone to zero. Given that this transmission doesn’t have an output speed sensor, I was a bit confused at first as to where this output signal was coming from. I decided to head back to the shop to begin diagnosis. When I drove back to the shop, I suddenly had up-shifts again. I never cycled the key or did anything to get it out of fail-safe, so was it ever in fail-safe at all?

I looked at the output RPM PID and it was reading just fine. I was paying close attention to the scan tool so I could capture a reading the moment it acted up. After driving down the road for another ten minutes with no issue, I went back to the railroad crossing that seemed to have caused it to go into fail-safe the first time. Sure enough, after crossing the rough tracks again the transmission stopped shifting and lost the output rpm signal. I did recheck for DTCs in all the modules again and the same codes were set in the modules except for the ECM.

Before I began driving again, I wanted to wait just like before to see if it would go back to shifting on its own. It did. I then went to a bumpy parking lot I knew of to confirm that the issue had something to do with bumps. Every time I hit a bump in the lot the unit would go into fail-safe. I then went back to the shop to look up some information on where this output RPM signal was coming from, and I really could not find a solid answer as to what the TCM used for this signal. I needed to press on. Since the left rear and right front wheel speed sensor DTCs did return, I decided to take a closer look at those codes.

After I raised the vehicle up on a two-post lift instead of the drive-on which I had used at first, I noticed the wires that were going to the rear wheel speed were being pulled and stretched very tight. (Figure 1)

All of the factory wire holders were in place, so I knew they hadn’t been tampered with. After I was able to unclip the harness, I peeled back the split loom where it was pulled and stretched the most and I found discoloration in the insulation. This led me to believe that the wire itself was barely connected by one or two strands. (Figure 2)

Since our lead diagnostician is always gathering information like this, I decided to put it all back just the way I found it and set up the scan tool to monitor the wheel speed sensor data and the output speed data, and I could pretty much prove that the output speed parameter was coming from the left rear wheel speed sensor. As you can see in the next image, at the same moment that the LR wheel sensor drops out the output speed goes to 8024 RPM which seems to be the arbitrary value that comes up on a FCA product when there is no signal. The “limp home mode” PID simultaneously changed to “set,” so it was in fact going into fail-safe! (Figure 3)

When I got back to the shop and got the vehicle back on the lift, I was able to pull on the wires, and it broke in half with very little force. (Figure 4)

I repaired the wires and reinstalled everything except I left one holder unclipped so that it wouldn’t pull anymore. I discovered that this Jeep had a very small 2” lift-kit that was just enough to cause this wiring issue by pulling them tight. I drove the vehicle in all of the aforementioned conditions and the issue did not return.

After the repair was completed, you can see that the LR wheel sensor and the OSS parameters basically mirror each other, as they should. (Figure 5)

I wouldn’t have thought a wheel speed sensor could have caused the transmission to go into fail-safe, but as they say, you never stop learning; there’s a new surprise around every corner.

Hyundai CV axle / PTU: A fresh set of eyes
Connect with us