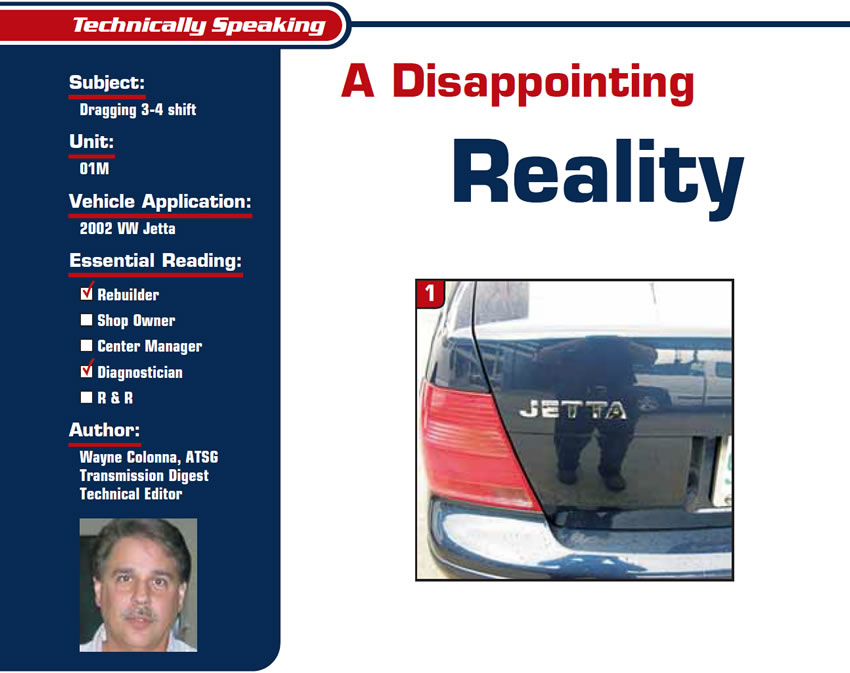 Over-the-phone diagnostics such as ATSG’s tech-line service for all our subscribers is a challenging experience. It is the guy in the shop on the other end of the phone whose words and explanations give us our eyes. From their description our brains can initiate a thought process that will provide either a direct solution or, at least, an orderly diagnostic procedure with steps taken to find the cause of the problem.

And there are many insightful comments that can be made along these lines, but since that is not the primary focus of this article I will stay on point instead of drifting. One aspect of our technical hotline is that we are immersed with electrical problems. As a result of this, we find ourselves providing the technician wire diagrams and electrical diagnostic procedures in an attempt to narrow down and locate the problem. But sometimes, the reality of the situation does not allow the technician to follow through with those steps. Let me give you an example of what I am belly-aching about.

There is a local shop that I visit frequently to diagnose problems, and I am thankful to the owner, Luis Zabala, for allowing me to do so. In this way, I do not forget what it is like to lie on the driver-side or passenger-side floor working under the dash, diagnosing electrical problems affecting the transmission. Nothing like having a kink in your neck for the next week! Or to burn your hands and arms trying to hook up a pressure gauge. It is remembering these things that help me out on the tech lines. I at least know what I am asking the technician to do in diagnosing a problem.

One recent week, Luis was having a problem with an 01M in a 2002 VW Jetta (see Figure 1). It had a slight bind-up on the 3-4 shift. It didn’t make a harsh shift; it was more like a dragging shift that lasted for about 1 second and then suddenly released when it finally went to fourth. Typically, what we see on the tech lines is more of a 3-4 shift flare rather than a dragging shift. This flared-shift complaint is usually due to either an incorrectly assembled K1 or B2 clutch pack or a leak in the K1 pre-fill pressure circuit causing the clutch to release too soon. However, a dragging shift also could be due to an incorrectly assembled K1 or B2 clutch, or a valve-body problem.

But by the time I was involved, not only were these possibilities eliminated but also the shop had replaced the transmission and it still dragged on the 3-4 shift. Could it be a computer issue? A return to basic settings was performed but had no affect. The shop does not own a VAG-COM, and the generic scan tools on hand did not show anything amiss. So now is the time to break out my ATS eight-channel PC-based diagnostic scope and hook it up to the harness to monitor all the solenoids at once to see whether the computer is providing an incorrect solenoid firing order or timing problem on the 3-4 shift, causing the drag. And then reality set in.

The TCM on this vehicle is in the plenum on the passenger side of the engine compartment (see Figure 2).

After looking into the plenum (see Figure 3), I could see that the amount of work it would take for me to expose and gain access to the wiring harness to hook up my scope would take up a good part of the morning.

And then Luis arrived, saying, “I have another TCM we can hook up and see if the TCM is really the problem.” So inside of five minutes, he had the connector unplugged (see Figure 5) and his test TCM plugged in (see Figure 6). A quick return to basic settings was performed and we were on the road, and the problem of the dragging 3-4 shift was gone. It was the TCM that was causing the problem.

But I sat there totally disappointed by the reality because I could not take the time to hook up my test equipment to see exactly what it was that the computer was doing. The car already had been in the shop much longer than it should have been. There already had been more hours of work performed than what Luis would be getting paid for, and now the car was fixed and the customer was going to have his vehicle back in time for the weekend. But I did learn one thing: There are times when certain scenarios will prohibit you from running a proper, orderly diagnostic routine and still make money by doing so. Not too many shops have the luxury of spending many unpaid hours just to learn. Sometimes a shortcut can be providential.