After overhaul, a GM vehicle equipped with the 6T40 BAS Hybrid transmission has a complaint of little or no movement. A line pressure check reveals extremely low pressure. The technician disconnected the transmission case connector to see what effect that would have on line pressure, but it was negligible.

Once the transmission was removed and inspected, the reason for the lack of pressure was found. This version of the 6T40 utilizes an auxiliary pump motor to provide pressure for the transmission when the engine shuts off. This ensures that there will be no delay in vehicle movement when the engine re-starts. The 6T40 BAS Hybrid transmission requires an additional seal that a non-hybrid model does not use: an auxiliary pump seal that is located between the main pump assembly and the torque converter housing, which is shown in Figure 1. The omission of this seal will cause a huge leak in the line pressure oil circuit resulting in the aforementioned complaint.

The Auxiliary Pump Motor Feed Pipe has cracked where it enters the transmission and is leaking down along the valve body cover; refer to Figure 2.

Note: The Auxiliary Pump Feed Pipe should be replaced during every rebuild as it is a common failure item. Do not mistake the auxiliary pump motor that is used for the BAS hybrid model for the high pressure accumulator used on vehicles equipped with the Engine Stop/Start feature which is positioned in the same location. 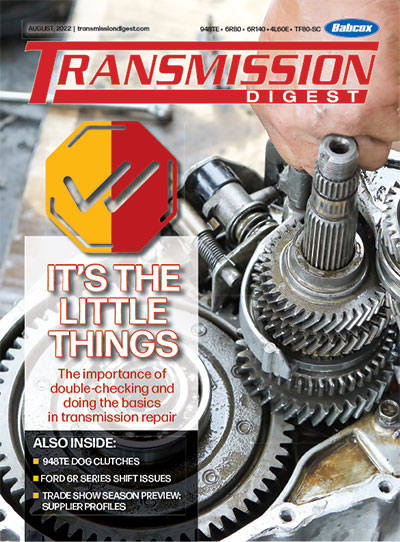