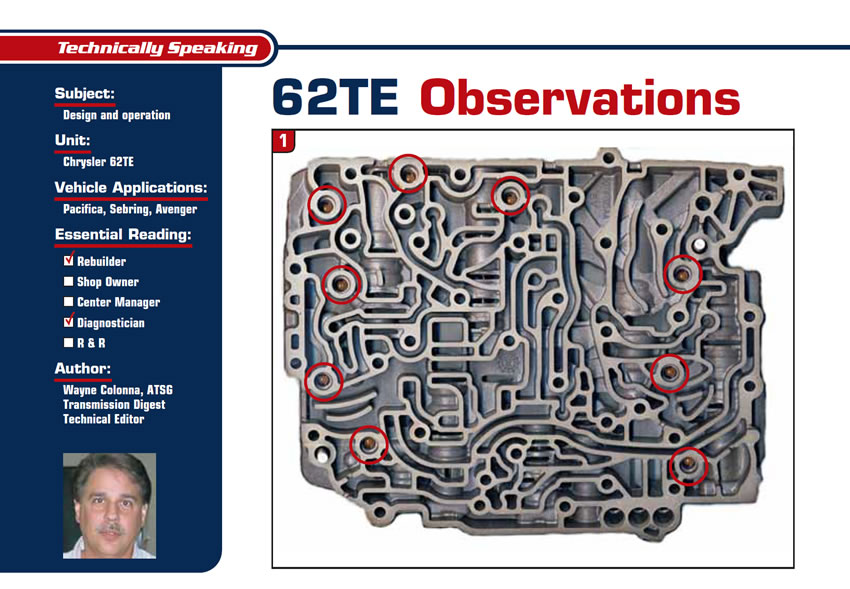 Last month, M D Publications presented its annual Showpower trade show in Chicago. I had the task of putting on a presentation regarding the 62TE transmission, introduced by the Chrysler Group of DaimlerChrysler AG, now being used in the Pacifica, Sebring and Avenger vehicles.

In this article I thought I would share with you several of these observations that I covered in this Showpower presentation on the 62TE.

This first observation originated when I separated a 62TE valve body for the first time. There were four checkballs that were removable as in any other transmission; nothing unusual here. What was unusual is that there are nine other checkballs in the valve body that are not removable (see Figure 1). Of course, the question of “Why?” came to mind. There has to be a good reason for this, and there is. I found it in a very informative SAE paper called the “62TE 6-Speed Transaxle for Chrysler Group” presented at the 2007 World Congress, April 16-19 in Detroit.

This paper basically describes how the expense of machined pressure taps and the cost of inserting the plug, combined with creating potential areas for leaks, resulted in the decision to eliminate all clutch-pressure taps. However, the ability to perform clutch-circuit pressure testing on the assembly line is necessary to ensure correct assembly and ongoing quality. The valve body was designed with checkballs positioned in specific tapered ports that allowed a test machine to insert a probe and unseat the checkballs to measure clutch pressure. Once the test has been completed and the probe is retracted, the checkballs then are used to seal their respective clutch circuits. The nine checkballs shown in Figure 1 are the ones used during this factory clutch-testing procedure. No attempt should be made to remove these balls, but checks should be made to see that they can seal pressure.

Now that I was satisfied as to the reason for these balls and their function, the explanation of clutch pressure taps being eliminated brings up another interesting observation that I had made earlier when I was taking the unit apart. That is, there is one pressure tap on this transmission, and it is used to check main line pressure. But this pressure tap is in one of the most-unusual places I have ever seen. It is in the lower-left pan rail alongside pan bolts, as you can see in Figure 2. But that is not what really struck me as being odd, especially in light of the explanation given regarding the potential leaks that pressure taps can cause.

If you look at Figure 3, you will notice that the low-/reverse-clutch pressure circuit is routed to the pan rail in a similar fashion as the main line-pressure tap. The difference is that this pressure port is not tapped and is blocked by the pan. This means that when the transmission is placed into reverse or anytime the transmission is in first gear, the pan has to seal that pressure. Now that, to me, is a major leak waiting to happen!

This sort of reminds me of how the 42LE uses press plugs in the L/R circuit that blow out and causes a huge mess. We drill and tap the port to cure this problem. And that is my suggestion here. Drill the pan and tap the circuit in the same fashion as the main line tap, and now you save yourself from a potential leak and you gain a clutch tap.